This community is an inspiration to our organization.  We feel so blessed that God brought us to work alongside this 3- man committee managing a school and feeding program for their neighbors.

Here is the short version of their story:

the USA) and partnered with the 3 men now on the committee to build a primary school in this very remote area.

They contracted with a builder who had the same philosophy as we do as an organization.  He used all local labor

and materials.  They designed the project with a great deal of input from the locals, and taught new and different

building practices as they went along. It was a beautiful example of a community taking responsibility and

actually used the same building practices to make improvements on his own home).  Unfortunately, things don't

always go as planned.  There were some problems with the Haitian man who had originally started the project.

This resulted in the project being abandoned by this man.  We see this all too frequently- those who came to help

after the earthquake, but then leaving projects half finished or worse.  Anyway, one of those original donors he

had, remained and continued to care about this community.  You see, after the school was built, running and had

teachers, the cost for feeding one hot meal per day, and other operating costs.  This is where WE come in.  They

contacted the man who designed and built the school who knew us.  We came up with a plan to work with these

men on the committee to see if they truly were determined toward sustainability and independence. Which they

have proven is, in fact, the case!  Since our involvement in the summer of 2014 they have filed legal paperwork

with the Haitian government and formed their own organization (responsible for running the school), they have

learned to keep accurate financial records of exact costs for running the school and feeding program, they have

started a small business of raising goats to sell, they have planted a nice garden area (again, with hopes of selling

the vegetables/fruits at market or using them to feed the children at school, etc... We have been very impressed

do not need foreign assistance to be successful" (which is especially difficult for them in such a remote area).

So..... where do we come in?  This is a perfect example of putting into practice all that we believe in and talk about as an organization.  We have taught bookkeeping skills; worked with the men on goal-setting and budgeting; helped get the teachers of the school some teacher training; helped them to do self-assessments (and then implement ways to improve on areas they feel weak in); facilitated a land transaction which gives their newly-formed organization legal ownership of the land where the school is situated; and (most recently) we were able to coordinate the re-construction of the ENTIRE school building!  It is now made of cement with a tin roof (unfortunately those local materials were not sustainable and were rotting after 5 years, but the lessons they learned building their school remain forever).  And, now they have completed a SECOND re-build and have replaced another section that was in bad shape (they also added a pavilion for community outreach, income generation, and school functions!).

The goal was that each year the committee would be responsible for more and more of the budget.  They will generate their own funds by raising/selling goats, encouraging more community involvement (parents especially), etc.  We will also keep working with them to brainstorm ideas (and implement them if feasible) to help become sustainable.

An example of how we are working toward sustainability is the installation of solar energy on site.  The community is located about 30 min. or so up a river bed (in dry season) so it is very remote with no power except a generator, but that means they must purchase gas. Gas costs money which adds to the budget.  They would also like to try more new gardening ideas if you have any to teach. We have also sent them to seminars on raising chickens and they now have quite a flock which feeds egg sandwiches to the school children every Friday and even has left over eggs to sell to supplement the budget. 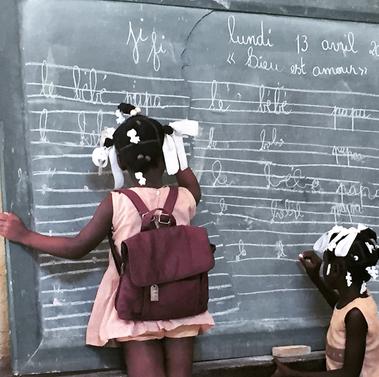 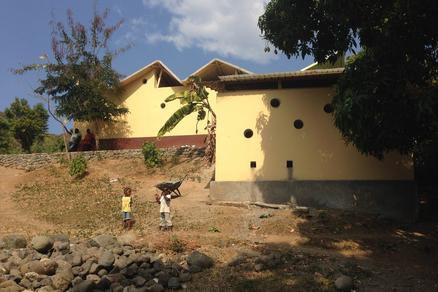